Thank You for Your Support! Ticket Sales Now Closed. 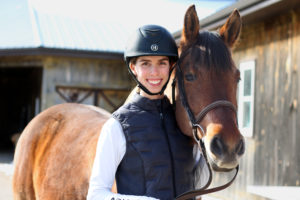 A horse of a different colour

The expression “get back on the horse” was never more true for Grace Hicks – a young woman who suffered a severe brain injury due to a horse-riding accident that initially left her paralyzed. Her creative care team at Parkwood Institute came up with a personalized plan that had Grace on “horseback” as part of her recovery in hospital.

The smell of wet grass filled her nostrils as avid rider Grace Hicks tumbled with her horse on Sept. 29, 2020. “We both went down hard,” says Grace. “It was a fluke accident. The right side of my body hit the ground, including my head.” Grace’s horse slipped on the damp sod from rainfall and the 20-year-old’s life took a turn she and her family, never expected.

The hit was severe, and she was air-lifted to the hospital. There she was placed in a medically induced coma as there was concern about brain swelling and the pressure it could cause. She was in an induced coma for a week. When she awoke, Grace discovered she wasn’t the same person. She had a severe brain injury and lost her ability to talk and walk. She could only move her head side to side.

Grace spent a full month in London Health Sciences Centre’s (LHSC) Victoria Hospital, her parents visiting her every chance they could. After a month, Grace was transferred to St. Joseph’s Parkwood Institute for rehabilitation.

Melissa Fielding was one of the members of Grace’s care team in the Acquired Brain Injury Program. “At first Grace was not interactive at all. She was tired and despondent, and her body couldn’t tolerate more than 15 minutes of physical activity each day,” says the physiotherapist. “She required two people to transfer her from bed to wheelchair.”

Grace’s time at Parkwood Institute also overlapped with the second wave of the COVID-19 pandemic. The support she received from her parents’ daily visits was sadly minimized due to restricted visiting directives from the government. “The first two weeks, she would just sit and stare,” says Melissa. “She had a tracheotomy and could only whisper, but she was very unresponsive.”

At this time, Grace was seeing a speech-language pathologist to earn how to talk again, occupational therapists, and physiotherapists – all rallying around her recovery. They never gave up on her. Slowly Grace’s body began to tolerate more activity as it healed, she began to come out of her shell.

She started to use the bodyweight support treadmill; a valuable piece of rehabilitation equipment funded by the St. Joseph’s Health Care Foundation. Twice a week, clinicians helped her move her legs to walk on the treadmill, as she was supported by strong bands.

“All of a sudden a light went on,” says Melissa. “She became talkative and interactive, and her quirky personality emerged. She was regular Grace – funny, sarcastic and very engaged. I think it came down to trust. We all developed a great rapport and she trusted us to help her reach her goals.”

Grace’s goal was a simple one. To ride again. “That was it,” says Grace. “I wanted to get back on that horse!”

Grace’s goal motivated her, but it was somewhat daunting for her parents.

Grace’s parents, Rosemary and Steve, got the call from the barn saying Grace had an accident. Rosemary works for Western and her office is located at LHSC and within the hour she watched in dismay as the helicopter brought her child in.

Due to COVID-19 restrictions, the parents looked through the window at their daughter – which was unbearable for the close-knit family of five. “I couldn’t hold her hand or let her know we were there. Her siblings couldn’t visit” says Rosemary. “Steve and I had no idea what her prognosis would be, and we anxiously waited for the results of Grace’s MRI. It was devastating to hear that she had suffered a severe brain injury. With that diagnosis, we were told that we had a long road ahead, that Grace would be in the hospital for months and require years of therapy. We were heartbroken.”

Once they were cleared to visit at the bedside, Grace’s parents started to see movement on her left side. Rosemary would stare at Grace’s right side and internally beg for it to move. “We had no idea what we were going to get. How thorough her recovery would be. So, we celebrated every little accomplishment, every toe wiggle.”

After her transfer to Parkwood Institute, recovery was alarmingly fast. “Grace likes shock value,” laughs her father. “The first time she walked we didn’t even see her coming. She walked into the room. We were astonished. You can’t even imagine the joy in seeing that,” says Steve.

Grace was hoping to be referred into some therapeutic riding after she was discharged, so Melissa was tasked with assessing her trunk balance to make an informed decision about the referral. “Can she manage this? Was the big question,” says Melissa. “She moved from lying to sitting to standing to walking… but could she sit on a horse?!”

To accomplish this, Melissa simulated a “horse-riding” session in the hospital’s gym. She rigged a peanut-shaped stability ball on a bed with wheels at a raised height over lots of padded mats. Grace had reigns to hold on to and clinical staff on both sides of her. “She had the hugest grin,” states Melissa. “Eventually we brought the “horse” up and down the halls as we pushed her along. It was a bit of a spectacle.”

This horse of a different colour worked wonders for Grace’s confidence and ability, and she managed it remarkably well. The creativity paid off and Grace’s care team worked with her riding coach, Shay Nejim, from All About Horses – together they developed a controlled plan for riding and rehabilitation.

Grace ended up leaving Parkwood Institute in record time and was released in a month and a half. “Her caseworker told us she was a miracle,” says Rosemary. “To recover so fast and so far. We know her love of riding and her care team made it all possible.”

Two months after her discharge Grace sent her care providers a picture with an update. There was Grace, beaming – on top of an actual horse.

A long way from a faux horse, Grace now has her driver’s license, is riding regularly and there is even talk of joining a horse jumping team.

“I have been basically riding horses since I was born,” says Grace. “I knew I had to get back on that horse. It meant everything to me. That’s how I was going to recover.”

Still careful and cautious and never taking her recovery for granted, Grace is literally back in the saddle and so happy to be there.

Every Ticket Changes a Life!

Thank you for your interest in Dream Lottery tickets. Due to lottery regulations, tickets can only be purchased if you are physically in Ontario and have an address in Ontario. Dream Lottery is intended for residents of Ontario only.

You can look around but you will be unable to purchase without verifying you are physically currently in Ontario and have an address in Ontario. Should you have any questions or concerns, please call our phone lines at 519-488-7100 or toll free at 1-866-802-4117 and one of our representatives would be happy to assist you.